Lamar Jackson Made His Myth in Real Time Against the Seahawks 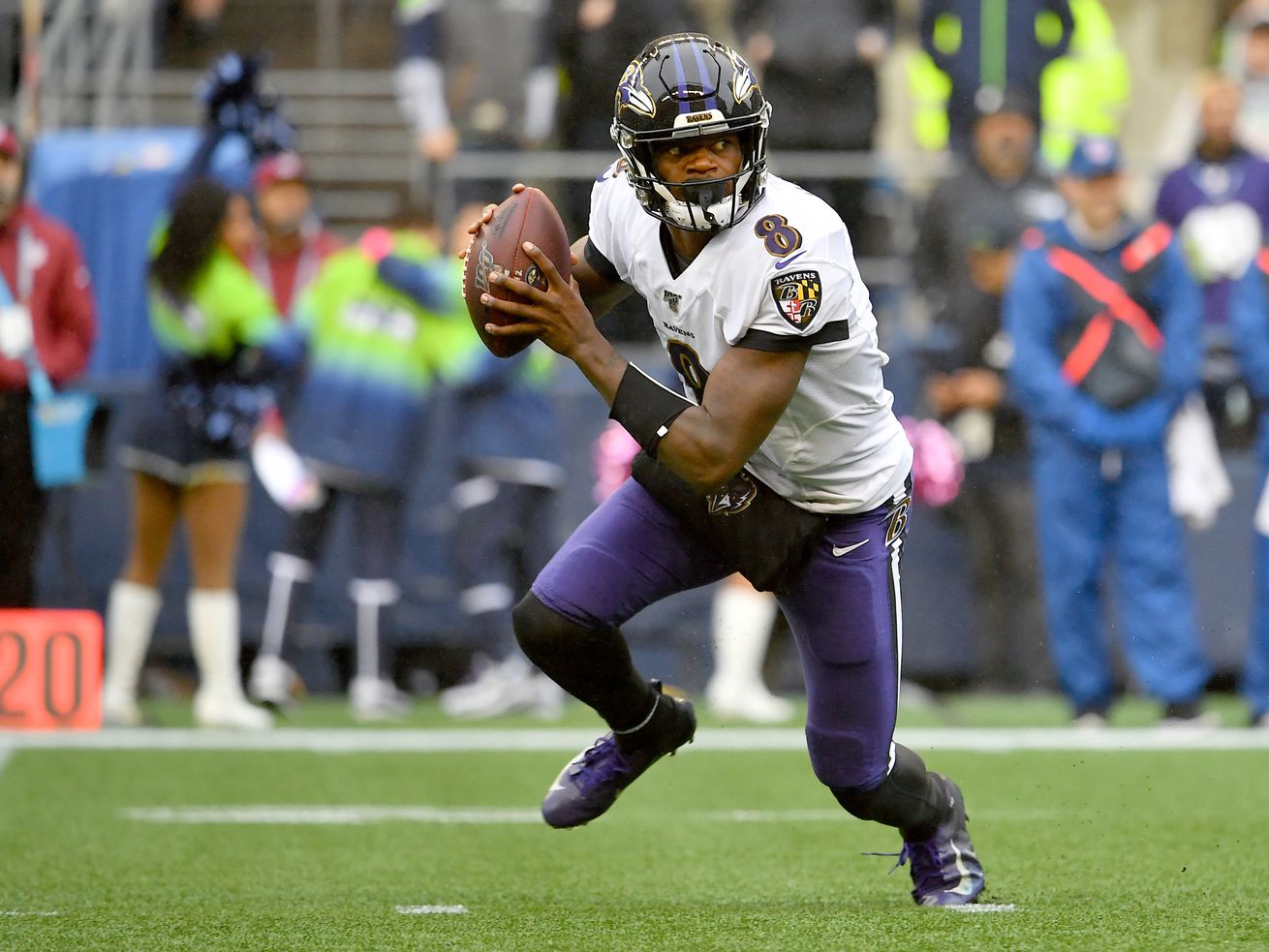 The second-year signal-caller sliced through Seattle on Sunday, betting on himself when it mattered most and leading the Ravens to victory

The Ravens had screwed up. With the game tied at 13 late in the third quarter at the Seahawks’ 16-yard line, quarterback Lamar Jackson placed a touchdown pass into tight end Mark Andrews’s hands, but the ball was batted out. Before they could snap the ball on second-and-10, they took a delay-of-game penalty as Jackson was screaming for center Matt Skura to snap the ball. The snap came too late and Jackson spiked it out of frustration.

Lamar Jackson loses it after a delay of game, but quickly forgives his center for not snapping the ball sooner #BALvsSEA pic.twitter.com/q5SCSwp9Gv

The penalty pushed the Ravens out of the red zone. On second-and-15 Jackson threw to Andrews on an underneath pass that would’ve gained a good chunk of yardage, but Andrews dropped it. The Ravens now faced a third-and-15, and Ravens head coach John Harbaugh later said he was content to kick a field goal, so they called a designed Lamar Jackson run to the right. The second-year quarterback diced and danced through the Seahawks defense for 13 yards, setting up a fourth-and-2. Harbaugh still wanted to kick a field goal, but he asked Jackson what he wanted to do.

Harbaugh was down. “I was told that [longtime Ravens right guard Marshal Yanda] said, ‘If [Lamar] wants to go for it, I want to go for it!’” Harbaugh said in his postgame press conference. “I felt the same way.”

Harbaugh kept his offense on the field. The Ravens called another designed run for Jackson and he scored easily to give Baltimore a 20-13 lead that Baltimore did not relinquish. Jackson once again spiked the ball, but this time it was in triumph.

Baltimore beat the Seahawks 30-16 in Seattle on Sunday to improve to 5-2 and strengthen their lead in the AFC North. It was a victory for not just the team but the entire Ravens organization, from front office to the coaching staff to players stepping up amid injuries. But the biggest reason the Ravens won on Sunday is Jackson. As a prospect, he was criticized for allegedly having too limited a skill-set to be a franchise quarterback, but in the nearly year since his first start, he has expanded our imagination of what a franchise quarterback can look like in more ways than one.

Jackson’s passing stats were not impressive on Sunday. Drenched in a Seattle downpour, he completed nine of 20 passes for 143 yards (7.2 yards per attempt) with no touchdowns, no picks, two fumbles (none lost), and one sack. More than a third of his passing yards came on his third throw of the game to receiver Miles Boykin, which went for 50 yards.

For the final 58 minutes of the game, he went six of 17 for 79 passing yards. (Jackson wasn’t the only one who struggled in the rain. Russell Wilson, lauded as the top MVP candidate entering this week, had his worst game since Week 1.)

Instead, Jackson shepherded Baltimore to victory with 14 carries for 116 rushing yards, becoming the first player in the Super Bowl era with 100 yards passing, 100 yards rushing, and a rushing TD in back-to-back games. He sent defenders sliding on scrambles …

… including a 28-yard run early in the second quarter …

And a 30-yard scramble on a third-and-8 midway through the fourth quarter.

But none of his plays were bigger than when he turned a third-and-15 into a fourth-and-2, and then a fourth-and-2 into a touchdown. As Harbaugh pointed out in his postgame press conference, offensive coordinator Greg Roman also deserves credit for that touchdown.

“Greg Roman had been kind of fighting for that play,” Harbaugh said. “We thought that play [quarterback power] would be there. Nice little motion there to get an extra blocker at the point of attack and a really good angle.”

Harbaugh had one issue with it: having their franchise quarterback run exposed between the tackles. They decided they would only use it in a critical situation. When that moment came, they rolled with it and Lamar delivered.

Jackson was not the only person to deliver. The Ravens’ dormant defense woke up on Sunday, perhaps sparked by safety Earl Thomas’s return to Seattle after his unceremonious exit after he broke his leg during contentious contract negotiations last year. Ravens cornerback Marlon Humphrey said after the game that Baltimore defenders told Thomas that the team had his back in his homecoming, and they held their word. Cornerback Marcus Peters, playing less than a week after being traded to Baltimore from the Los Angeles Rams, began his Baltimore career by intercepting Russell Wilson—Wilson’s first pick of the year—and returning it 67 yards for a touchdown. That gave the Ravens a 13-10 lead late in the first half. In the fourth quarter, Humphrey appeared to hurt his arm but stayed in the game. He later scooped a D.K. Metcalf fumble and returned it 18 yards for a touchdown to make the score 30-13 with less than four minutes to play, sealing the win.

“Appreciate y’all boys, man,” Thomas said surrounded by his teammates in a locker room huddle. “It’s good when y’all boys tell me something, and y’all follow through. Y’all said you had my back and y’all really had my back, coaches included.”

The Ravens have been following through on their promises this season. Before this year Harbaugh said their offense would revolutionize the sport—and he told people to take the over on Jackson having 139 rushing attempts this year. He and Jackson may not be Bill Walsh and Joe Montana, but this offense is something few living football fans have seen. Jackson has 82.3 yards per game on the ground this season, more than eight teams had entering Sunday. That is a per-game basis, but on a per-carry basis Jackson has more rushing yards than every team and player, period. He is averaging 6.9 yards per rush attempt this season, which would make him the fourth player in the Super Bowl era with at least 100 rush attempts to reach that mark in a season, along with Michael Vick, Randall Cunningham, and Russell Wilson. The difference between Jackson and those three is the sheer quantity of attempts he has per game. Jackson is on pace to break the record for rush attempts by a quarterback by Week 14—a mark he set last year. Before the 2018 draft, Michael Vick said that Lamar Jackson was like him, but better. So far, Vick is right. Jackson’s at almost 20 rushing yards per game better than Vick’s career high (64.9).

There are certainly still questions about the Ravens. They don’t have a great pass-rush. Their secondary is still suspect, despite how it played on Sunday. Their lack of receiving experience was particularly acute with Mark Andrews’s drops against Seattle. All of those issues could come back to haunt them. The biggest questions are still around Jackson in the playoffs after his disastrous wild-card round loss to the Chargers last year. But Jackson has overcome plenty of doubt thus far. Every team in the NFL who had a first-round pick in 2018 passed on him in the draft, including the Ravens, who took tight end Hayden Hurst before drafting Jackson 32nd. This offseason, more doubt was cast on Jackson when he said he did not know the Ravens were changing their offense in May and had trouble throwing consistent spirals in the same month. Yet Jackson’s production so far speaks for itself, and of all of Jackson’s numbers, one stands out: He is 11-3 in the regular season since he took over as the Ravens’ starting quarterback in Week 11 of last year, tied with Russell Wilson for the most regular-season wins in football in that span. This preseason, Baltimore was behind the Steelers and Browns as betting favorites to win the division; now, it enters its bye week at 5-2 and in control of the AFC North. When they return, the Ravens face the New England Patriots on Sunday Night Football in a matchup of the two highest-scoring teams in the NFL.

“I’m locked in, I’m trying to win,” Jackson said after the game. “I had an OK rookie year. My second year I learned a lot. Man, I’m just trying to win.”